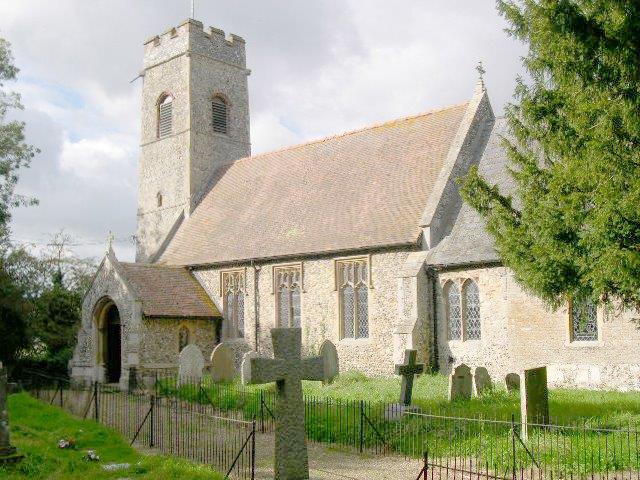 There has been a church in Rockland St Mary since at least the mid 14th century, although records show that the first priest was appointed 100 years earlier.  Over 300 years ago Rockland was divided into two, with Rockland Major with St Marys Church, and Rockland Minor with St Margarets Church.

Once upon a time the Abbotts of Langley Abbey owned a manor here and it is thought that there may have been a dispute between the monks and the parishioners, resulting in two churches being built so close to each other.  St Margarets has however been derelict for well over 300 years and only a pile of flint remains can now be seen in the churchyard.

The register of St Marys dates back to 1656 and was recorded in Latin for the first 50 years.  The church was originally thatched but in 1892 it was roofed with tiles and new stone windows were added at a cost then of over £500.

Local benefactor John Hotblack had the interior reseated and the south porch (recently retiled to both floor and roof) was added by his son in memory of his wife.  The North vestry was added in 1937.  There was once a medieval cross discovered in the area but its site is unknown.  Three of Edward VI's men were prosecuted for pulling it down.

The church is definitely worth a visit for its peace and tranquility, standing in a large well kept churchyard with benches for rest.  There is a 14th century entrance door with original handle and irons.  The15th century font has been recut and the bells date back to 1599.
Take a look at the Rector's Stall which bears a carved rooster, and examine the fine stained glass windows in the chancel and the memorial to those who died in the First World War - quite a large proportion of the young men of the village.

In 2016 over £90,000 was spent on outstanding maintenance issues, mostly generously grant-aided by The National Lottery Fund as well as local and national benefactors.

There is usually a service once a week and the church is open daily from dawn to dusk.